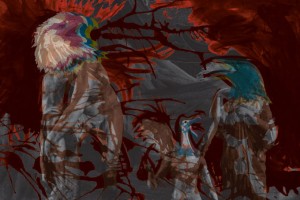 If We Were Birds is a riveting re-imagining of Ovid’s masterpiece “Tereus, Procne and Philomela”. When King Pandion marries his daughter Procne off to war hero King Tereus, Procne returns with him to Thrace and is separated from her beloved sister Philomela. After years of isolation in a foreign land, Procne begs Tereus to fetch her sister for a visit. When confronted with Philomela’s beauty, Tereus’ desire triumphs over reason igniting a chain of horrific events.  A harrowing exploration of violence and revenge, this adaptation features a chorus of ravaged women, each a victim of a 20th Century conflict: Bosnia-Herzegovina, Rwanda, Bangladesh, Nanking, and Berlin. (groundwaterproductions.com)