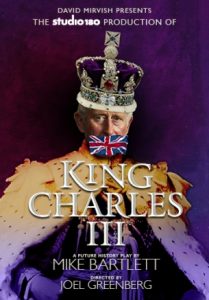 Charles. Camilla. William. Kate. Harry. One family holds the future of Great Britain in its hands. But what will the future be? The Queen is dead. The “King-in-waiting” finally ascends the throne. Defying centuries of tradition, Charles boldly attempts to reassert the crown’s power, landing himself – and his country – in a royal mess.

Exploring power and betrayal, the internationally acclaimed play, KING CHARLES III, skillfully reveals the people beneath the crowns as nuanced flesh and blood, and turns a Shakespearean lens on relationships in the world’s most famous and exposed family. (studio180theatre.com)