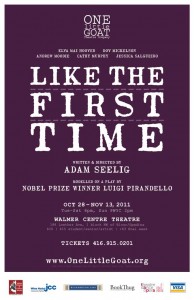 Like the First Time revolves around Fulvia, a woman torn between her current life as a single woman and her past life as a wife and mother. On the one hand there is Marco, her latest lover, while on the other there’s Silvio, her former husband, who wants to reclaim her as his wife and mother to their now-teenage daughter. Complicating all this is the daughter’s belief that her mother is long dead. Which direction Fulvia’s life will take remains uncertain, and the ambivalence of her feelings, reflected in the ambiguity of her actions, makes for riveting drama. (Like the First Time Press Release)