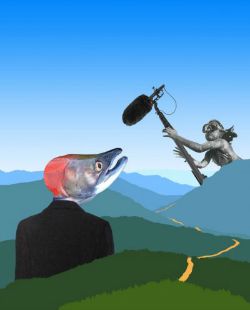 In 2012 and 2013, Architect Theatre travelled to Northern British Columbia, speaking with people along the route of the proposed Northern Gateway Pipeline. Inspired by this research, Like There’s No Tomorrow imagines an unconventional environmental review panel.

A bureaucratic space is transformed through the voice of an elder. As she speaks, bridging the quotidian and the profound, connecting the spiritual to deep worries about the present moment, she invokes the possibility of a different way forward.

Architect Theatre’s newest project began as a play about a pipeline and, now, confronts much more. A meditative and emotional work, Like There’s No Tomorrow moves from the personal to the monumental, where the official meets the sublime, bringing focus to the human in the landscape of progress. (summerworks.ca)