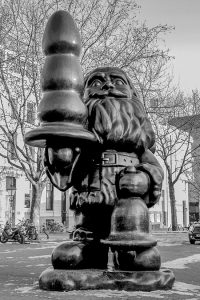 Looking for Paul: Inez van Dam vs. the Buttplug Gnome (2016)

Created by the company.

Inez van Dam lives and works in Rotterdam opposite the so-called “Buttplug Gnome,” a controversial public sculpture by contemporary American artist Paul McCarthy, whose work is known for satirizing mass media and consumerism. After receiving a US grant, Dutch theatre collective Wunderbaum brings Inez to LA to help her confront McCarthy and to develop her story as part of their residency.

The resulting work documents their journey and artistic process that explodes — sometimes very messily — into a debate on aesthetics and the politics and meaning of public art. (harbourfrontcentre.com)