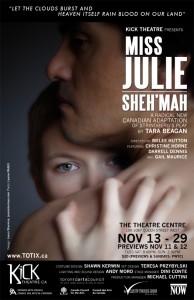 Brutal, hilarious, sexy, and specifically Canadian – Miss Julie: Sheh’mah is an adaption of August Strindberg’s 1888 play Miss Julie. Miss Julie: Sheh’mah stars Christine Horne as the Canadian-born daughter of English emigrants to the British Columbia interior in 1929. Her servants, Jonny and Christie Ann are from the Shushwap and Thompson River Salish nations and both have been through the Residential School system. The gulf between the upper-class Miss Julie and her two aboriginal servants becomes one of race and lays bare the uncomfortable distance between the people with power and those without.  (theatermania.com)