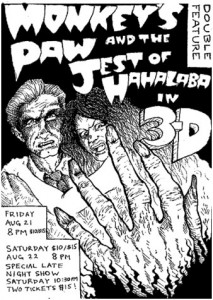 The Monkey’s Paw is a classic piece of horror that has seen many incarnations over the past 100 years. It was originally a short story written by W.W. Jacobs. The play was first performed in 1910. Although some of the language is a bit dated, the play is just as chilling as it was when first written.

The Jest of Hahalaba is also a classic ‘be careful what you wish for’ storyline, but is darkly comical rather than horrifying. It was written by the fantasiest Lord Dunsany, famous for his novel The King of Elfland’s Daughter. It is a cautionary tale on the evils of greed, which was ironically written shortly before the 1929 stock market crash.  (monkeyspaw.weebly.com)