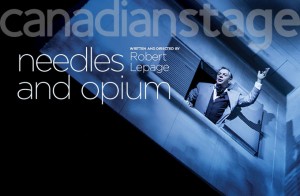 The show contains excerpts from Jean Cocteau’s A Letter to Americans and Opium, the Diary of a Cure.

Presented as a hypnotic series of vignettes, this fascinating, introspective show explores the complex relationships between displacement, drug addiction and the creative drive, as revealed through the lives of Parisian poet/filmmaker Jean Cocteau on his way to New York, and American jazz legend Miles Davis during his stay in Paris in 1949. The most startling technical wizardry at the service of a true emotional journey. (canadianstage.com)