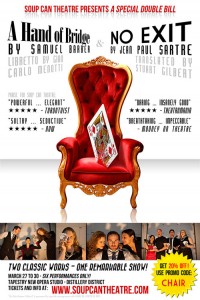 In Sartre’s No Exit, three recently deceased strangers with shadowy pasts find themselves trapped together in a room in Hell with only three chairs and a grotesque bronze sculpture as the sum total of their new existence. The trio quickly realize that torture and eternal torment do not come at the hands of demons with hot pokers, but rather from each other’s words, thoughts, urges, and actions. Even though No Exit was written in 1944, it still manages to reflect present day issues with chilling accuracy. (Show Press Release)