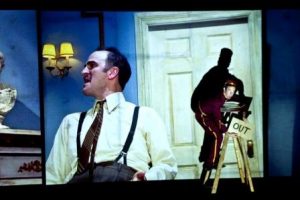 Presented as part of the 4×4 Festival: An Off-Road Event of Women Directors

This existential masterpiece gets a 21st century treatment as a ‘live movie’ in this extraordinary, hybrid film and theatre theatre performance conceived and directed by the prolific Kim Collier – one of the most exciting Canadian directors of this generation in her Toronto debut. (nigthwoodtheatre.net)