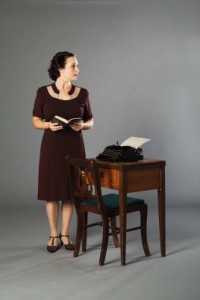 1930s Europe. As Hitler’s army gains momentum, only one port remains open to thousands of fleeing Jewish refugees: Shanghai, China. Adapted from the memoirs of many, and told through the eyes of a fiercely resilient young woman, On The Other Side of the World is the story of a young girl, her family, and a community that sought shelter and survival in a country and culture unlike their own. A rarely told story by a powerful emerging playwright. (fringetoronto.com)