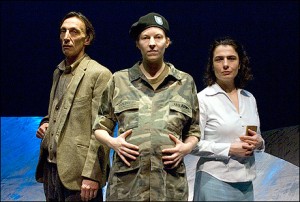 Three lives. Three voices. Three perspectives on the war in Iraq: the plain-spoken, goofy, 23-year-old soldier imprisoned for torturing prisoners at Abu Ghraib; the brilliant microbiologist and weapons inspector who blew the whistle on the dossier justifying the invasion of Iraq; and a mother and political leader who suffered the greatest loss imaginable at the hands of Saddam Hussein. This raw and poetic new work by award-winning playwright Judith Thompson will challenge your beliefs while celebrating the music of the human voice and the depths of the human soul.  (canstage.com)