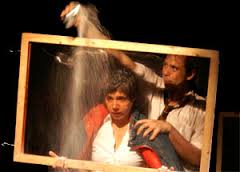 Particularly in the Heartland (2007)

Winner of the 2006 Edinburgh Fringe First Award, shortlisted for the Edinburgh Best Writing Award 2006, awarded Best Production Dublin Fringe 2007, Particularly in the Heartland is a fantastical journey into the geographical center of the United States. The three Springer children are orphaned after what might be a tornado or an alien invasion or the Rapture itself. One by one three visitors arrive: an alien in possession of the body of a dead pregnant teenage girl, an East Coast business woman named Dorothy whose plane has crashed in the cornfields, and the ghost of 1968 democratic presidential hopeful and liberal icon Robert F. Kennedy. A year passes and a new American family is forged in eggs and flour, music and magic.

Particularly in the Heartland is a play about losing sight of America and trying to fall back in love with it. (theteam.org)