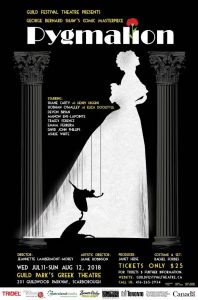 Pygmalion, arguably George Bernard Shaws best and most popular play, is a brilliantly constructed comedy of manners inspired by the classical myth of a sculptor who falls in love with his own creation. A sort of Cinderella fairy tale injected with a shot of feminism, it is a crushing condemnation of the British class system.

We meet Henry Higgins, an arrogant, self-centred misogynist disenchanted with society and certain of his own superiority. When an ambitious young flower seller comes to him to make a better life for herself, he sees only a lab experiment. Before she knows it, Eliza Doolittle is caught in his project, sliding down the slippery slope toward her undoing.

With the power of glorious Celtic song, a trio of fierce female spirits urges the story along as Eliza navigates the delightful journey toward her necessary independence. (brownpapertickets.com)