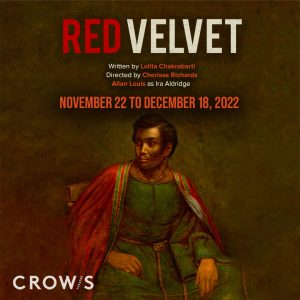 London, 1833. A Black man has never starred on a major London stage—not even as Othello—until tonight.

An imagined version of true events, RED VELVET transports audiences to the turbulent backstage world of London’s Theatre Royal in Covent Garden to tell the little-known story of Ira Aldridge, an African-American stage actor. As British Parliament debates the abolition of slavery, Aldridge prepares to make his entrance as Othello. His groundbreaking performance upends centuries of British stage tradition and changes the lives of everyone involved.

The audience is enamoured but the critics are not amused and the Theatre Royal is temporarily shut down. Despite this, Aldridge went on to build a stellar career with an impeccable reputation throughout Europe, but he never returned to a London stage again. (crowstheatre.com)