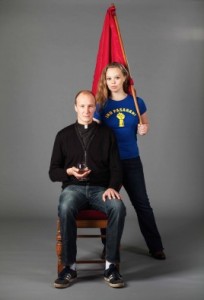 In the midst of the Spanish Civil War, Senora Carrar refuses to pick sides: her husband died in combat and she’s determined to keep her two sons alive and out of the conflict. But as Franco’s army marches towards their village, her resolve is challenged. This new adaptation is based on Brecht’s little-known masterpiece, Senora Carrar’s Rifles , written in 1937. (fringetoronto.com)