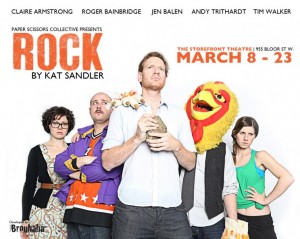 Rock is a pitch black comedy about love, friendship, and how far you would go to protect someone you care about who has recently started bludgeoning people to death with rocks.

Ben (Andy Trithardt), a moderately successful late-twenties actor, has started hearing voices telling him to kill bad people with rocks. Ben’s somewhat distant girlfriend Tasha (Jen Balen) is all for him realizing his potential, and his freeloading best friend Mikey, (Tim Walker) bought them capes. Now if only the spirit of the first guy he killed would stop hanging around the house drinking all the beer, Ben would be set.

Rock continues writer and director Kat Sandler’s tradition of exploring the grey areas of modern morality and examining the little voices we hear in our heads. (theatrebrouhaha.com)