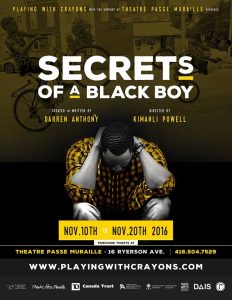 Secrets of a Black Boy is a brutally honest dramedy that gives voice to five young black men from Toronto as they come together for one last domino game at their local community centre before its permanent closure – a devastating result of the neighbourhood’s revitalization project. With thousands of people already displaced, the ongoing dismantling of the community serves as a constant reminder that the only home many youth have ever known is literally being ripped apart with questionable explanation and rationale.