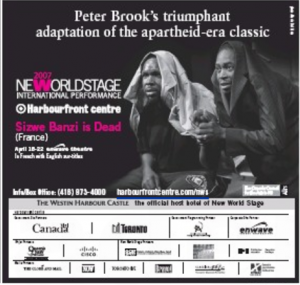 Sizwe Banzi is in desperate need to provide for his family. The problem lies in that his passbook contains the wrong information and this prevents him from finding work. In concert with his friend Buntu, they discover a corpse lying by the side of the road, and the idea of lifting the dead man’s papers might provide the ability to work. An engaging and humorous production of beautiful simplicity. (Show Press Release)