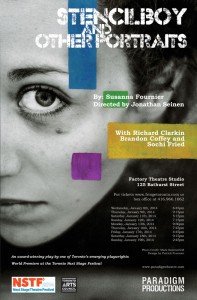 Lily ditches her small-town life and makes for the city.  Her fervent desire to be immortalized in a painting leads her to two radically different men – an underground graffiti artist and a once-famous painter.

Caught between them, Lily fights to find a place in a dystopian world that has all but abandoned Art, and where the boundaries between sex, creation, violence, and addiction become dangerously blurred. (fringetoronto.com)