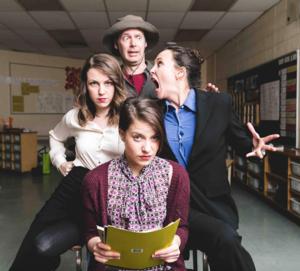 Presented as part of a double-bill with Parents Night (2015)

The Bigger Issue stands at the volatile intersection of poverty, violence and mental health. Suzy is a young grade seven teacher struggling to do her best under the watchful eye of her principal Irene, caught between the needs of her students and the demands of an out-of-touch administration. After a troubling incident with a student, both are confronted by his parents, Maggie and Jack, a couple trying to do their best for their son under extreme circumstances. With the family’s survival hanging in the balance, The Bigger Issue is complex as well as surprising and intensely funny. (stage-door.com)