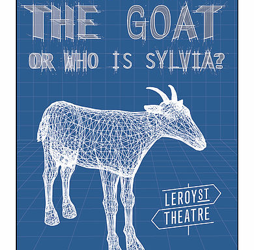 Martin is “at the pinnacle of [his] success”. A Pritzker Prize winning architect recently chosen to be the head designer of the $200 billion World City. He is surrounded by his loving family and supportive friends. Life is great for Martin however, he has a secret, and the simple question “Who is Sylvia?” may bring everything down around him.
Edward Albee’s hilarious, award winning play is both timeless and contemporary. Albee borrows from the greek tragedies and creates an entirely new predicament for the 21st Century which leaves us asking more questions than when we arrived. His play test’s the limits of our empathy for those we love and the problems that arise when our animalistic nature surfaces to clash with the fragility of our so called civilized life. (Show Facebook Event)