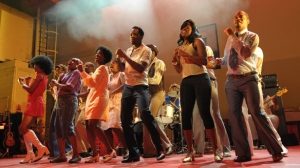 A poor Jamaican farm boy with stars in his eyes and a dream in his heart, Ivan heads to Kingston with ambitions to become a reggae hit-maker. Soon enough he is faced with the harsh realities of the music industry and veers sharply down the path of drugs, crime and vengeance, earning infamy for his exploits as an outlaw just as his musical star begins to rise. (where.ca)