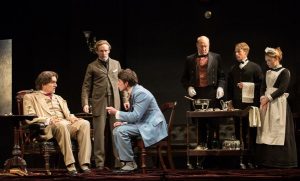 It is 1895 and Oscar Wilde’s masterpiece, The Importance of Being Earnest, is playing in the West End after a triumphant premiere, but already the wheels are in motion, which will lead to his imprisonment, downfall and vilification. Forced to make a choice between his lover, Lord Alfred Douglas, and his freedom, the ever romantic Wilde embarks on a course towards self-destruction. (mirvish.com)