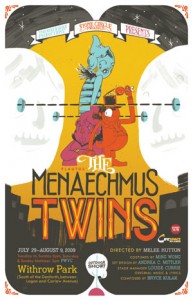 Plautus’ The Menaechmus Twins tells the story of separated identical twin brothers, each coincidentally named Menaechmus, who as adults unwittingly come to occupy the same ancient streets of Epidamnus. After several incidents of mistaken identity, confusion, adultery, madness, foiled plots, twists, turns and near misses, the twins are re-united and a slave is allowed to go free. Early farce at its best, The Menaechmus Twins is a rare blend of the classical with the modern incorporating sung text and farce. It is light, uproariously funny, and bawdy, offering our audience the chance to escape into a world of mayhem and carnival. (catpr.ca)