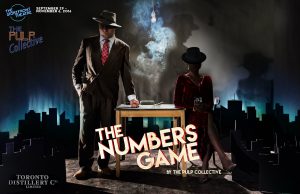 Set in the dirty 30’s, The Numbers Game is based on the gang and race war that tore through Harlem after prohibition ended and organized crime turned from booze to gambling. Following the story of Stephanie ‘Queenie’ St. Clair, a fiery Madam known as the Tiger from Marseilles, and the Beer Baron of New York,Dutch Schultz, The Numbers Game dives into the race-fuelled clash between these two titans of illicit industry. As Queenie defends Harlem’s booming penny lottery “numbers game” against Schultz’s brutal invasion, New York city seethes with power hungry gangsters ready to knife or cheat their way to the top. (pulpcollective.ca)