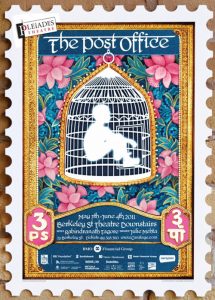 The Post Office is one of the world’s most enduring and enchanting works, reflecting the profound wisdom and humanity of its author, Rabindranath Tagore. Using the grave illness of a young boy as his inspiration, Tagore embarks on a spiritual journey that strips away life’s many encumbrances to take us to those places of timeless and universal truth. Written in Bengali in 1911, this jewel of a play is practically unknown in Canada. Poetic and deeply moving, far-reaching and universal in scope, this story is ideally suited for serious adults and curious children. Tagore (1861 – 1941) is still considered the Poet Laureate of India and in 1913, he was the first non-European to be awarded the Nobel Prize for Literature. This play offers a glimpse into Tagore’s enormous understanding of the human spirit. (pleiadestheatre.org)