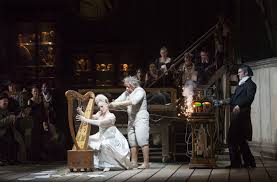 The titular character is a poet and storyteller in love with Stella, an opera singer. At a local tavern with his friend Nicklausse (actually his Muse in disguise) and his rival Lindorf, Hoffmann is convinced to sing a song to the eagerly listening revelers (he’s quite drunk at this point). The ensuing performance relates his pursuit of three prior great loves—and how they were thwarted by a cast of demonic villains, all played by bass-baritone John Relyea. (torontolife.com)