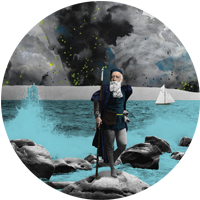 One of Shakespeare’s most acclaimed plays The Tempest tells the tale of a vengeful, exiled lord who is willing to sacrifice the happiness of his beloved daughter as a means to destroy his rivals. Set on a desolate island full of mystery and magic, The Tempest explores the nature of justice, the illusion of power and the fantastical monsters that lurk within the human condition. (harthousetheatre.ca)