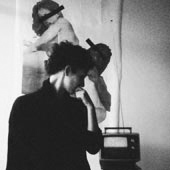 A mysterious student posts questionably offensive material on the class discussion board, testing the liberalism of a young professor of film theory. The attacks become vicious and bizarre.

How can you remain progressive when progress becomes dangerous?

The play’s combination of theatre, cinema, and new media allows for intertextual storytelling, fitting for a theory professor who is obsessed with reading into films and reading into the behaviour of her tormentor. “Theory” speaks with the same technological savvy of its characters to investigate the dangers of how we communicate today. (Show Facebook Event)