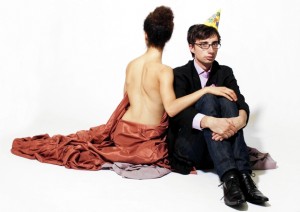 Tomasso’s Party, by young novelist Jules Lewis (Waiting for Ricky Tantrum, Dundurn Press), holds a microscope up to conventional ideas of intimacy through the nuanced exploration of a simple circumstance involving a young couple: Madeleine wants to go to Tomasso’s party; Hugo does not.  As the two argue deep insecurities they have about themselves and each other are revealed. The power between them shifts; both are surprised and damaged.  This world premiere production is a raw portrayal of sexual politics, intellectual jealousy, relationship power dynamics and lays bare the vulnerability of human emotions.  (fringetoronto.com)