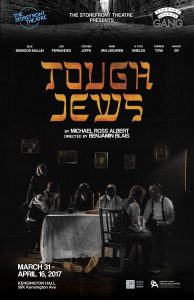 When a murder is committed in Prohibition-era Kensington Market, a family of would-be criminals is suddenly flung into the high-stakes gangland world of American organized crime. Set against the backdrop of the roaring twenties, the Great Depression, and the biggest race riot in Canadian history, TOUGH JEWS is the story of an immigrant family’s struggle to rise above their station in a violent, intolerant city. (thestorefronttheatre.com)