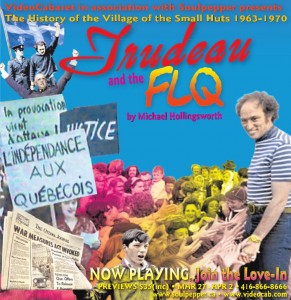 The Young Centre for the Performing Arts

As the centenary of Canada’s Confederation approaches, Quebec separatists crank up the violence. On a stage lit by terrorist bombings, Professor Trudeau pirouettes to power. The acid-tripping rock-throwing Sixties are conjured up by a master storyteller with the magical stagecraft of the 2013 Dora Award-winning VideoCabaret ensemble. (youngcentre.ca)