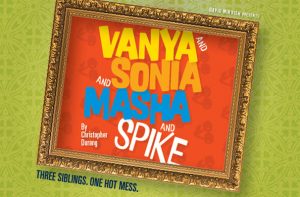 When you name your three children after Chekhov characters, you’re asking for problems. And so it turns out for Vanya, Sonia and Masha, who have grown up to be three of the most dysfunctional siblings imaginable. Masha is an incredibly self-aggrandising B-movie actress who traverses the globe, earning enough money to support her brother and sister, who stayed at home to look after their parents, and have grown ever more socially withdrawn in the process. Now, the parents have died and Masha is back! This human hurricane brings toyboy lover Spike in tow, together with plans to sell the family house. Inevitably, farce and chaos ensues! (toronto-theatre.com)