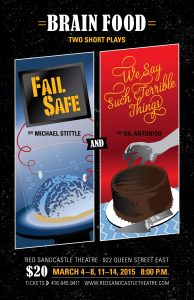 Presented as part of a double bill with Fail Safe (2015)

Arts professor Adam has invited his colleague Donald over for drinks to see if he as an ally in his war against their school’s administration, but Adam’s boyfriend Chris is unable to keep his resentments to himself, and Donald’s boyfriend is a student. Things don’t improve when Benjamin shows up and proves they all say such terrible things. (Show Facebook Event)