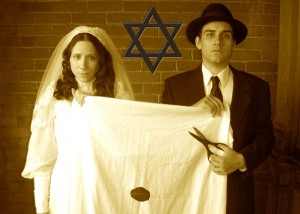 A previous workshop version of this show was shown at the Ashkenaz Festival at Harbourfront Centre in on August 31 and September 1, 2008.

Traditional Jewish law requires that newly married couples be alone together in an enclosed room for a short period of time immediately following the wedding ceremony in a ritual called Yichud (Seclusion). Join newlyweds Rachel and Chaim in the Yichud room moments after their wedding ceremony, where the nervous young couple is alone together for the very first time…EVER. Awkward moments and uncertain expectations make for a hilarious and touching encounter. (harbourfrontcentre.com)