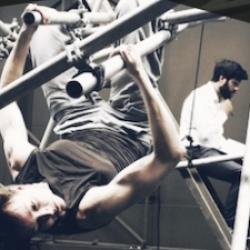 The subject of a long-forgotten behavoural experiment, Kiran has been living alone for as long as she can remember with AL, a ‘state-of-the-art’ 1968 computer, as her only companion. Over the decades their space has decayed into a treacherous maze of beams and wires, leaving them suspended in midair and struggling to hold the pieces together. And now the experiment itself is losing its grip. (ticketweb.ca)