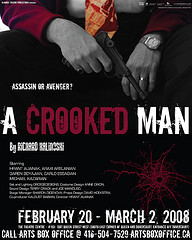 Throughout his life, the 88-year-old Hagop, now living in the United States, has been tormented by nightmares stemming from the horrors he witnessed as a child during the Armenian genocide, including his family’s murder. His nightmares extend to his own act of defiance when, as a young man in Germany, he assassinated the Turkish governor responsible for perpetrating the massacres in his village. When his reporter grandson interviews him for what is to be an innocuous magazine article, the old man finally begins to confront his demons and reveals not only the awful details of his past, but, for the very first time ever, a terrible secret that has consumed his whole life.
Inspired by a true story, A Crooked Man offers no easy answers to the issues of guilt and innocence, murderer or hero. Sprinkled with a familiar relational humour as the old man’s stubbornness meets the naivety of his grandson and the worry of his daughter, A Crooked Man touches the heart with its mirror on an anguished soul. (artword.net)