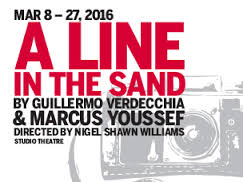 Nigel Shawn Williams directs the gripping story of an unlikely friendship between a Canadian soldier and a Palestinian teenager that goes horribly wrong in this Chalmers Award-winning play set against the backdrop of Operation Desert Shield. With issues that are just as relevant to Canadian society today as they were nearly two decades ago, the play forces us to challenge our national myths and confront the brutal acts committed in our name. (factorytheatre.com)