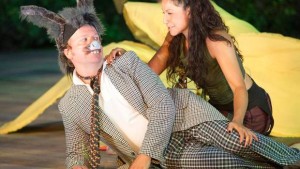 In this production, director Richard Rose has given the play a unique Toronto twist, bringing it closer than ever to High Park today. Celebrations are planned to mark the marriage of the Duke Theseus to Hippolyta. A frustrated townsperson, Egeus, comes to Theseus for help — his daughter Hermia refuses to marry Demetrius because she is in love with Lysander. Theseus orders Hermia to obey her father but she and Lysander decide to escape together. They confide in their friend Helena and she, in love with Demetrius and hoping to win his heart, betrays their plan. That night, all four lovers sneak away into the forest — Hermia and Lysander together, with Helena and Demetrius following.

A group of amateur actors, led by Pierre Le Coing but dominated by the diva Bottom, go to the woods to rehearse The Tragedy of Pyramus and Thisbe, which they will perform for the Duke’s wedding.

Oberon and Titania, fairy rulers of the forest, have been arguing. To spite Titania, Oberon uses the juice of a magic flower which makes her fall in love with the first creature she sees. This happens to be Bottom, whom jester Puck has bewitched, giving him the head of a donkey. Oberon tells Puck to use the juice on Demetrius so he will return Helena’s love, but Puck mistakenly bewitches Lysander instead and he falls in love with Helena. We watch the characters’ mishaps as they struggle their way out of and into the knots of love. (canadianstage.com)