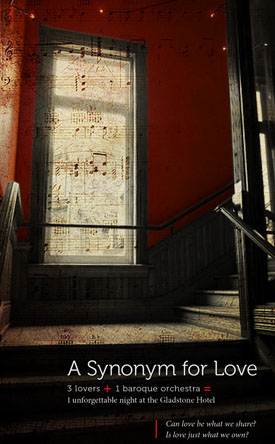 Three guests are staying at the historic Gladstone Hotel in Toronto – one of the most beautiful boutique hotels in the city. A woman is at the bar ordering drinks. A man is waiting at a table for her to return. She looks at him, and sings of her love. Another woman – who has just checked in, and who also happens to be the first woman’s lover – enters. She sees the couple, and, enraged, storms out, and up to her room.

This is the beginning of our love triangle. In our version, the two sopranos remain women – one is gay, one is bisexual. The man is straight, and feeling threatened. Everyone is at the same hotel. They all sing like angels. (gladstonehotel.com)