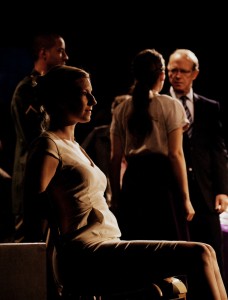 It’s an Antigone that hinges on reasonable accommodation and terrorism. That asks real – difficult, tragic – questions about our capacity to deal with migration and difference. A contemporary mythic Antigone that is as ambiguous, complex and painful as politics, family and death actually are. The production is for a community hall. Rough and stunning. Scale and grassroots. With beautiful costumes and the kind of embedded technology we all live with – a layering of pre-recorded and live voice,  noises and music, with flat screen live feed television. A world of mediatized politics, constant surveillance, a robot tank and uncertain realities .

It’s an Antigone performed by ghosts. The ghosts of the characters of Antigone. Ghosts who, after two thousand years of enacting their stories over and over – stories of rebellion and death, of  “the strangers at the gates”, of generational conflict and civil wars –these ghosts begin to wonder what would happen if they could tell a different story. (smallwoodenshoe.org)