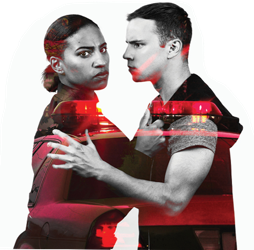 A teenager is held in a department store security holding room by the female security guard who caught him shoplifting. As he tries to lure her into dropping the charges, they find themselves unexpectedly intertwined. When the police officer arrives to process the case, the tables are turned and keep on spinning.
Caught explores questions around entitlement, blame, consequence and justice. It focuses on human interactions and the various ways we hurt both one another and ourselves. (passemuraille.ca)