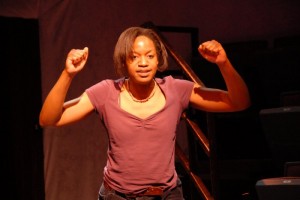 Not My Pig Not My Farm Productions

Even Darkness is Made of Light is a dark comedy about suicide: 17-year old Carrie Edison is struggling with the loss of her high school crush and feels responsible for his accidental death. Depressed and disillusioned with the realities of her surroundings, she masterminds “Operation Exit [email protected]#$% up Planet” Everything is in place: it can’t fail, it won’t fail– so long as it’s done after she sees the next installment of the Twilight series. (Summerworks 2010 Festival Program)