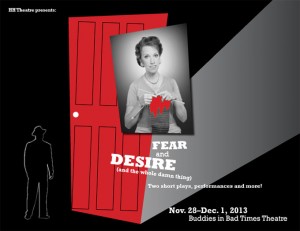 Fear and Desire (and the whole damn thing) is a queer mystery-comedy triplebill featuring the long-awaited revival of the Toronto drag hit, People Are Horrible Wherever You Go—about a pair of lesbian tourists on a holiday from hell. This drag classic is written and performed by David Bateman and David Roche and directed by Em Glasspool. Also featured is Hope Thompson’s latest play, Stiff—a murder mystery set against the invention of a male sexual stimulant. Stiff stars Greg Campbell, Kirsten Johnson, Mary Krohnert and Andy Pogson and is directed by Clinton Walker. Separating these two queer mystery-comedies is a performance set by rising young theatre stars Jenna Harris, JP Larocque and Jessica Moss. Fear and Desire (and the whole damn thing) is a thrilling and hilarious trip into the history of Toronto queer theatre—featuring a hit from the past, a hit from today and performances from the voices of tomorrow—with local luminary Keith Cole acting as tour guide and host along the way. (Show Press Release)