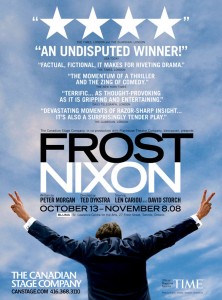 This internationally acclaimed play premiered at the world-famous Donmar Warehouse in London. It dramatizes a series of unprecedented television interviews revealing how David Frost, a playboy and talk-show host with a fading reputation, came to solicit an apology and the admission of guilt that the extremely intelligent, but disgraced President Richard Nixon had worked so diligently to avoid giving to anyone – even when under oath to do so. (canstage.com)