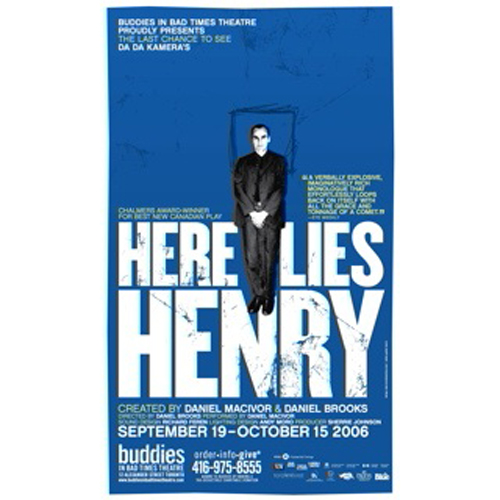 With Here Lies Henry, MacIvor gives voice to the character of Henry, a self-confessed liar. Henry rambles with a mixture of energy and fun. He’s a thirty-something optimist who ponders the meaning and pointlessness of life. He begins slowly by revealing things about himself, such as his childhood, his homosexuality, and his lies. He claims his assignment is to tell the audience something they don’t already know. Since Henry is a professional liar, it’s difficult to distinguish between his lies and the truth. Presented in a minimalist style familiar to da da kamera audiences, one actor, light and sound combine to give an atmosphere of intimacy breaking down the fourth wall and making the audience feel like they are part of the drama. That is to say, making them feel like they are part of Henry’s world  which of course, they are. MacIvor cannily distills the human condition and seesaws hilariously between truth and lies, and more lies. (buddiesinbadtimestheatre.com, 2006).