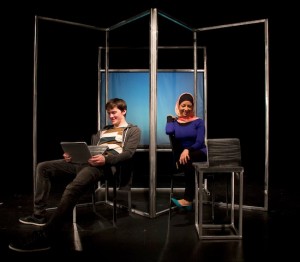 Fatima is a typical Canadian young woman, rebelling against her strict parents. When anti-Muslim graffiti appears on the school walls, this hijab-wearing teenager is transferred to a new school. There, she makes an unlikely friendship with Jorah, a boy who has a reputation for anger issues. As their mutual attraction grows, the lines they cross to get closer together become the subject of an intense exploration of the meaning of boundaries. Jabber examines assumptions based on appearances within the school world – where a diverse student population must learn to negotiate cross-cultural respect and mutual understanding. (youngpeoplestheatre.ca)