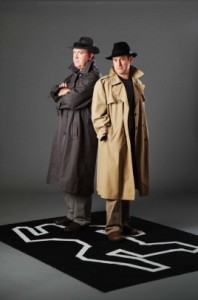 It’s the first preview of “Lucky In Love.” The Producer is hoping for a long run. The show starts with the same old song and dance until a body turns up on stage. Now, it’s up to Richard Gunn PI to solve the case. There’s a spoiled Diva, an aging star and a confused leading man. The backstage crew is overworked and the chorus is wooden. Everyone is a suspect. It is, after all, a Killer Business. (fringetoronto.com)