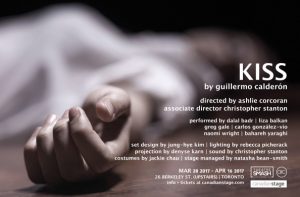 Two couples meet for dinner to take their minds off the war raging around them. An unexpected profession of love, an untimely proposal, and one kiss later, one of the foursome lies dead on the floor. Chilean playwright Guillermo Calderón’s newest play breaks open cultural barriers, challenging us to confront the limits of our own understanding… (canadianstage.com)